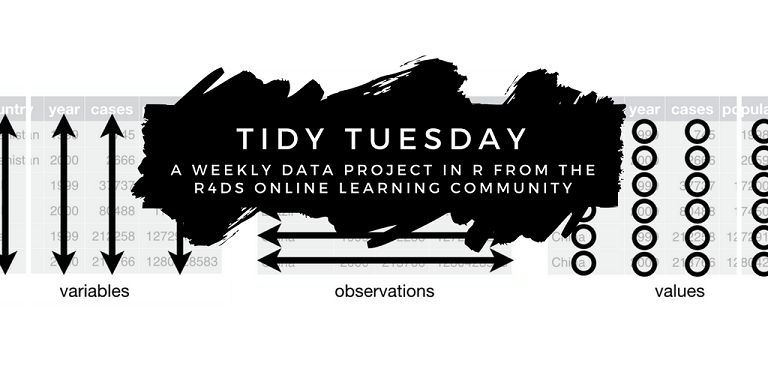 Over the past month or so, the r4ds online learning community founded by Jesse Maegan has been developing projects intended to help connect mentors and learners. One of the first projects born out of this collaboration is #TidyTuesday, a weekly social data project focused on using tidyverse packages to clean, wrangle, tidy, and plot a new dataset every Tuesday.

If you are interested in joining the r4ds online learning community check out Jesse Maegan’s post here!

Every Monday we will release a new dataset on our GitHub that has been tamed, but does not always adhere to “tidy” data principles. This dataset will come from an article with an interesting plot. Our goal is to have you take a look at the raw data, and generate either a copy of the original plot or a novel take on the data! You can obviously use whatever techniques you feel are appropriate, but the data will be organized in a way that tidyverse tools will work well!

Why such an emphasis on the tidyverse? 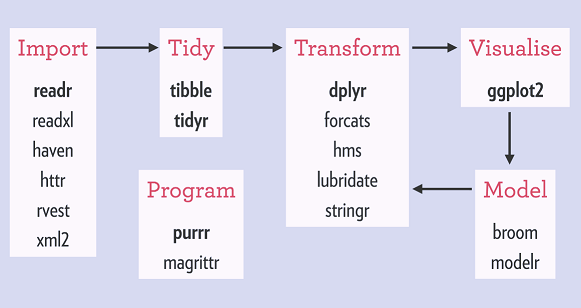 The tidyverse is an “opinionated collection of R packages designed for data science. All packages share an underlying design philosophy, grammar, and data structures.” The tidyverse is at the core of the the R for Data Science text written by Garrett Grolemund and Hadley Wickham. This book is aimed to be beginner-friendly but also deep enough to empower R experts as well. The framework of both the book and the tidyverse package is seen above.

We focus on the tidyverse package as the r4ds online learning community was founded “with the goal of creating a supportive and responsive online space for learners and mentors to gather and work through the R for Data Science text”. Beyond that, the tidyverse is consistent, powerful, and typically more beginner friendly. It is a good framework to get started with, and is complementary to base R (or the 1000s of other R packages).

To participate in TidyTuesday, you need to do a few things:

However, that might seem like a lot! So at minimum please submit your plot with the hashtag #TidyTuesday.

All data will be posted on the data sets page on Monday. It will include the link to the original article (for context) and to the data set.

If you want to work on GitHub (a useful data science skill) feel free to post your code on GitHub! This will allow others to see and use your code, whereas an image of the code means they would have to re-type everything! Additionally, hosting on GitHub gives you a Data Science Portfolio to talk about/show in interviews, and allows you to access your code across different computers easily!

You can also upload your code into Carbon, a website the generates a high-quality image of your code.

Lastly, if you create your plot with the tidyverse you can save high quality ggplot2 images!

We welcome all newcomers, enthusiasts, and experts to participate, but be mindful of a few things:

Everyone did such a great job! I’m posting all the ones that I can find through the hashtag, you can always tag me in your post to make sure you get noticed in the future.

I plotted the costs for the last 5 years in the data pic.twitter.com/jNQwHI1mqu

Meenakshi learned about new tidyverse functions and made a beautiful rainbow plot!

#tidytuesday done on a monday. Learnt gather and fct_reorder. Loved it!
Made my plot 🌈🌈 Thanks Thomas!! 😃 pic.twitter.com/oqKV6HlBBt

Son had several takes on the data, all of which helped tell the story!

#TidyTuesday Prices always go up, but if you compare it to the annual average then interesting things happen. Something happened in Arizona, Ohio, Hawai.

Just having a little bit of R fun this Tuesday. Found this #TidyTuesday and thought I could give my contribution. I gather() and summarise() all the Year variables though...makes a different result.
Thanks @thomas_mock for this good idea. #rstats pic.twitter.com/q54fI9LZRl

John was one of our first submissions, and made a nice geo heatmap!

10 year tuition growth per state. Second map is with Hawaii filtered out as it was bit of an outlier and darkening the entire map.#TidyTuesday #R4DS #rstats pic.twitter.com/EPE07myFCi

The Part Time Analyst selected a range of states that showed nice differences!

my attempt at tidy tuesday. Difficult part was getting the cost from character to numeric #TidyTuesday #rstats pic.twitter.com/1fq70OSbhZ

Paula made a clean difference from the mean barplot!

on #tidytuesday I got this code https://t.co/nabbUZxLm3 I'm wondering if the values are right in what I did similar to yours @brenborbon but different from the original plot 🤔 pic.twitter.com/49IYNxR2EJ

Nivranshu wrote a blogpost and made several graphs with their own cricket data!

Dylan submitted two takes on the data that both turned out great!

Here's my first go at #TidyTuesday, working with tuition data in the United States. Nothing is quite as smooth as #tidyverse and #rstats when doing data analysis. Let me know your thoughts! pic.twitter.com/DLoP31bOXK

Raul submitted a nice, facetted graph with a swapped axis!

Hopefully not too late for a #tidytuesday submission pic.twitter.com/fqtc2YLXkh

The Wire Monkey submitted a gif of the US with hex states!

Not something I would do in practice, but I used the opportunity to experiment with R. #TidyTuesday #rstats #ggplot2 pic.twitter.com/rJ3kX1C2AR

I loved that approach. I wanted to see what the growth rates looked like identifiable by state, here went.... th code is https://t.co/HGqXMVnhnF#TidyTuesday pic.twitter.com/pnCf8aJqP2

Frank wrote a great blogpost on his “4 hour process”!

My #TidyTuesday submission, a first pass with geo_facet() and trying to get my head around nested data frames. Not sure the absolute ranking is as important as showing where each state is relative to the others https://t.co/Hp3wd7R4VL pic.twitter.com/K4FFY7rg74

Miguel used some data he was already working on, with nice walk-though code!

My intent of exploratory analysis based on categorical data (factor variables). Group counting by conditions, creating two new datasets with the results and joining them by a common variable to plot the whole information. Thoughts? #TidyTuesday #rstats pic.twitter.com/NqHyHPH3qd

If you made a plot and I missed it, feel free to contact me on Twitter with a link to your tweet. As #TidyTuesday grows, there may be issues where Twitter doesn’t show ALL the plots to me – so it may be helpful to tag me directly in your post to guarantee I see it for sharing!

Here’s to next week! Good luck!

I’d also like to thank the #r4ds Mentorship Pilot team for their help in conceptualizing TidyTuesday: Terence, Rosa Castillo, Andrew Macfarland, Ariel Levy, Burcukaniskan, Corrado Lanera, Jake Kaupp, Jason Baik, Jesse Maegan, Radovan Kavicky, Raul, and Shan. There are some other cool projects coming out of this group, so stay posted as they roll out over the next few months.

The R for Data Science textbook

We will use the fivethirtyeight package frequently for “tame data

A guide to getting started with GitHub

How to save high quality ggplot2 images